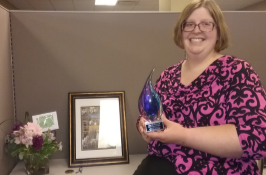 Before she was even a teenager, Sarah Prince was already an avid volunteer. “Ever since middle school, I always felt passionate about helping the community.” From age 10 through high school Sarah volunteered doing a wide variety of activities at her church – from reading to children to waitressing at spaghetti dinners. Throughout college, she worked with Goodwill Industries in their On the Move program, providing mentally and physically challenged adults the opportunity to interact with the world like everyone else – attending events, making crafts-basic things many of us take for granted.

When Sarah started at Hydro-Thermal as a college intern, no volunteer program or efforts of any type existed. Her inherent desire to help others was the key driver in making a formal volunteer program a reality.

Sarah’s efforts at Hydro-Thermal started with serving meals at the Ronald McDonald House. She recruited volunteers from throughout the organization, unifying them to help the cause. Coworkers enjoyed working alongside each other and quickly understood and shared Sarah’s love for serving others. Then it grew–from helping at Ronald McDonald House every other month to identifying worthy organizations that could use help every month of the year, sometimes even coordinating multiple events per month!

One of the volunteer staffers she recruited was ex-military, Bill Rheingans. Sarah’s ability to listen to the customer, in this case her volunteers, led her to assisting a wide variety of military organizations – from assembling care packages for troops overseas, to placing and removing flags on graves for military holidays, to gathering donations for a local military troop. In her usual altruistic and enthusiastic approach, Sarah rallied numerous internal staff and external businesses to help remember and care for those who protect us.

These are only two examples of Sarah’s current volunteerism, but there are many more. Aside from founding and leading the Volunteer Committee, she donated her paid time off hours to staff who were in need due to illness, participated in multiple fund raisers for breast cancer awareness, clothed the homeless, and more.

Sarah was also a member of Hydro-Thermal’s Health and Wellness Committee from its impetus. Through her involvement with the team she led Hydro-Thermal staff to start a walking program, run its own Biggest Loser competition, prepare healthier snacks and meals, and more. Sarah has also learned a lot herself from being involved on this team, better managing her own weight and learning the value of nutrition and exercise.

You might think all this volunteerism takes up most of Sarah’s work time. Amazingly enough, she so masterfully balances her workload that she also won the Hydro-Thermal President’s Award this year. The President’s Award is an annual honor bestowed on a Hydro-Thermal staffer who embodies our Culture Statements, in short having integrity, being a customer advocate, and being growth-centric.

Sarah started at Hydro-Thermal in October 2009 as a Marketing Intern. Prior to Sarah joining Hydro-Thermal, the organization did not fully realize the importance of market research. As an intern, Sarah provided the data to define a marketing campaign targeted at meat producers.

Upon graduating from Carroll University in 2010 with her Bachelor’s Degree, Sarah was promoted to the role of Marketing Research Assistant, a position created due to her impact as an intern. Since then she has been involved with many significant research-related efforts, including being a critical contributor to the company’s 80th anniversary celebrations, international and domestic channel partner meetings, the designer of org-wide training on accessing and pulling data from our sales software, and more.

In 2015 Sarah’s expertise was recognized formally through her promotion to Market Research Analyst. Since then she has led the revolutionary buyer persona project, project managed the new Hydro-Thermal website, and drove significant increases in traffic by her use of site analytics. She is the epitome of a can-do attitude, sharing her expertise willingly and without reservation.

Most recently Sarah completed an evaluation of the market research she conducted for staff at Hydro-Thermal in 2016. Out of the 21 projects she completed last year, 19 of them were utilized for business planning – either in marketing, engineering, or sales. The other two research projects will be used in the future for market trend and analysis. This not only speaks to the volume of research she does, but also the major importance and value placed on what she supplies for our organization.

Throughout her entire time with Hydro-Thermal Sarah has consistently worked far beyond the parameters of her position description. She is known as one of a handful of people that you can count on to find you an answer, regardless of it’s her turf or not.

Being a goal oriented, voracious problem solver who loves a challenge, Sarah embarked on her MBA, just a few short years after earning her BA. She graduated from UW-Whitewater with her MBA in 2014, and although she was still working full-time at Hydro-Thermal, and earned a 3.8 of 4.0. “I wanted to accomplish this before I got married and have children (hopefully one day) so my focus could be on school.” She also thinks about pursuing her PhD at some point. “Lifelong learning is so important. I can imagine myself as an 80-year-old woman taking class at a local college, just because I enjoy it.”

More in this category: « Every Day is Manufacturing Day at Hydro-Thermal Spring into Fitness Challenge »
back to top